Law in War: Freedom and restriction in Australia during the Great War Catherine Bond 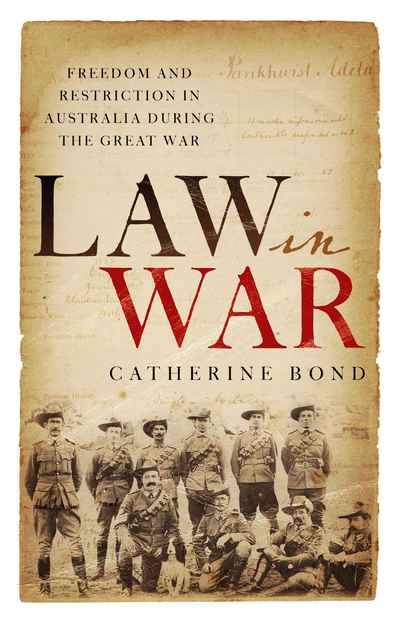 Law in War: Freedom and restriction in Australia during the Great War
Catherine Bond

During the Great War law was used in everyday life as a tool to discriminate, oppress, censor and deprive many Australians of property, liberty and basic human rights.

A nation often amends its laws during war, not least to regulate life at home. Yet few historians have considered the impact of the law on Australians during the First World War. In this original book, Catherine Bond breathes life into the laws that were central to the way people were managed in Australia 1914–18.

Engaging and revelatory, Law in War holds those who wrote the laws to account, exposing the sheer breadth and impact of this wartime legal regime, the injustices of which linger to this day. More than anything, it illuminates how ordinary people were caught up in – and sometimes destroyed by – these laws created in the name of victory.

'Law in War gives us insights into the law and Australia's Great War that Charles Bean declined to publish ninety-odd years ago. Pioneering, full of wonderful life and energy, the result has been worth waiting for.' — Professor Peter Stanley, UNSW Canberra

'...in the midst of this crisis it is hard to imagine a historical text timelier than Law in War: Freedom and restriction in Australia during the Great War. A century later, lessons from that era are still instructive today...Bond's latest book is engaging, insightful, and important.' — ABR