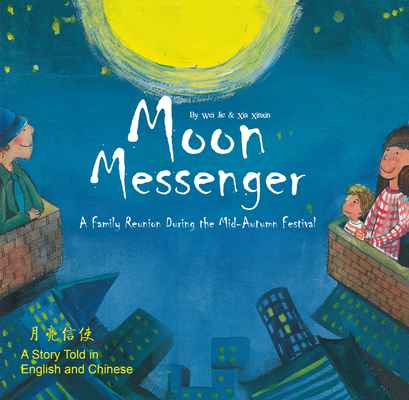 A sweet story that highlights a family's bond, even when they're far apart.

In China, the Mid-Autumn festival is a time to celebrate and reunite with family. However, Mao Mao's father is away on a business trip this year, and won't be able to enjoy the holiday with his wife and son.

Hoping they can celebrate under the same bright moon despite the distance between them, Mao Mao asks the moon to deliver a postcard to his father; the moon smiles and promises to deliver the message safely. The moon sets off immediately, using the stars in the sky as her guide. During her journey, the moon makes many friends: swimming alongside the fish, chasing clouds and planes, playing hide-and-seek with a little girl.

Finally, she delivers the postcard to Mao Mao's father and, at last, they are all celebrating under the same moon.