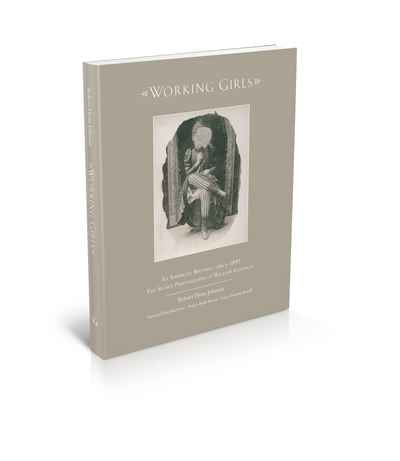 What started out as a simple trip to a postcard fair turned into a lifelong investigation for author Robert Flynn Johnson. Captivated by the beauty and originality of a group of nineteenth-century photographs of women, he had to know more.

Now, nearly a decade after his first encounter with the images, Johnson has uncovered more than two hundred vintage photographs of women who lived and worked at a brothel in Reading, Pennsylvania, circa 1892. Taken by commercial photographer William Goldman, the photographs paint a full picture of the environment that the women inhabited—from inside the brothel, posing artistically for the camera, to their off-duty routines, such as reading, smoking, and bathing. Never-before published and taken two decades before the famous E. J. Bellocq photographs of prostitutes in Storyville in New Orleans circa 1913, these beautifully produced photographs are only now seeing the light of day.

Johnson uses these photographs to detail their aesthetic, historical, and sociological importance in the history of photography, examining them alongside paintings and photographs by such artists as Degas, Picasso, Atget, and more. Accompanied by essays from Professor Ruth Rosen and Dennita Sewell that provide an insightful historical overview of these images in context of the period in which they were taken and a foreword from famed burlesque dancer Dita Von Teese, this volume provides a personal visual record of lives of these women while also offering a deeper understanding of the Working Girls that existed more than 120 years ago.