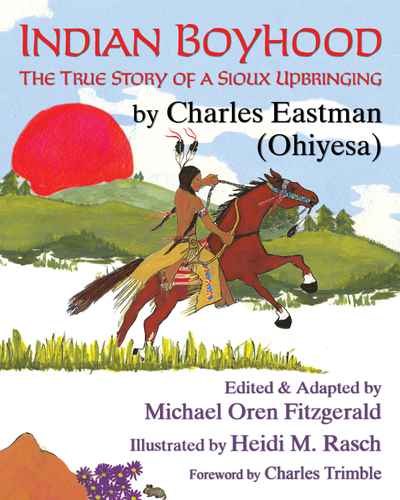 Imagine a childhood full of adventure. Where riding horses, playing in the woods, and hunting for food was part of everyday life; where a grizzly bear, a raccoon, or a squirrel was your favorite pet. But imagine, too, being an orphan at the age of six, being forced off your land by U.S. soldiers, and often going hungry. Such was the childhood of the first great American Indian author, Charles Eastman, or Ohiyesa (1858-1939).

Carefully edited for a younger audience by multiple award-winning author and editor, Michael Oren Fitzgerald, Indian Boyhood recalls Eastman’s earliest childhood memories. He was born in a buffalo hide tipi in western Minnesota, and raised in the traditional Dakota Sioux manner until he was fifteen years old. He was then transplanted into the “white man’s” world. Educated at Dartmouth College, he went on to become a medical doctor, renowned author, field secretary for the YMCA, and a spokesman for American Indians.