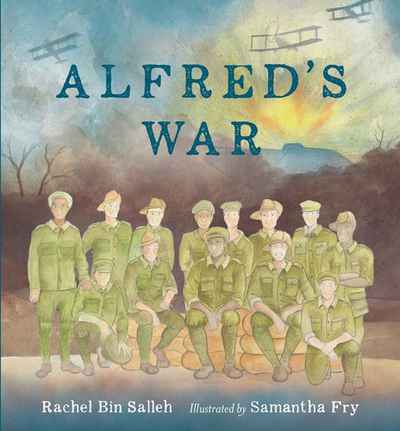 Alfred's War is a powerful story that unmasks the lack of recognition given to Australian Indigenous servicemen who returned from the WWI battlelines. Alfred was just a young man when he was injured and shipped home from France. Neither honoured as a returned soldier or offered government support afforded to non-Indigenous servicemen, Alfred took up a solitary life walking the back roads – billy tied to his swag, finding work where he could.

Alfred was a forgotten soldier. Although he had fought bravely in the Great War, as an Aboriginal man he wasn't classed as a citizen of his own country. Yet Alfred always remembered his friends in the trenches and the mateship they had shared. Sometimes he could still hear the never-ending gunfire in his head and the whispers of diggers praying. Every year on ANZAC Day, Alfred walked to the nearest town, where he would quietly stand behind the people gathered and pay homage to his fallen mates.

Rachel Bin Salleh's poignant narrative opens our hearts to the sacrifice and contribution that Indigenous people have made to Australia's war efforts, the true extent of which is only now being revealed.

'Every year sees a swell of new stories about ANZAC Day and Alfred's War is my pick of 2018's crop…It's a poignant story, one rooted in truth, and a damning critique of Australian history. Rachel Bin Salleh skilfully renders some tough subjects accessible for young readers, without ever ignoring the reality of Alfred's situation. The beautiful images from first-time illustrator Samantha Fry also help to soften the sharper edges of this tale.' — Bronte Coates, Readings

'Poignant and confronting, revealing and decisive, this beautifully rendered story provides a fundamental link for children of any creed and background to appreciate the sacrifices and contributions made by indigenous people in the shaping of our Australian history.' — The Boomerang Books Blog

'a beautifully illustrated book...poignant and subtle, its emotional power heightened by its restraint...There is a delicate, dreamlike-quality to the watercolour illustrations by Samantha Fry, an indigenous artist from Darwin.' — Rosemary Neill, The Weekend Australian

'In the lead-up to Anzac Day (April 25), our TV screens and news outlets will be covering dawn services and marches so it is crucial children have some understanding of the day's significance….Alfred's War is particularly poignant due to its Indigenous lens and a story not often told.' — Laura Jones, South Sydney Herald

'The beautifully presented picture book tells younger readers the story of Alfred… Rachel Bin Salleh's sparse words give a dignity to the injustices raised by her story… this book adds a new story to the pantheon of tales children read, allowing them to think about the way some people were treated in the past, while encouraging them to mull over how things could and should have been different.' — Fran Knight, ReadPlus