Elements of a Philosophy of Technology: On the Evolutionary History of Culture
Ernst Kapp, edited by Jeffrey West Kirkwood, Leif Weatherby, translated by Lauren K. Wolfe, afterword by Siegfried Zielinski 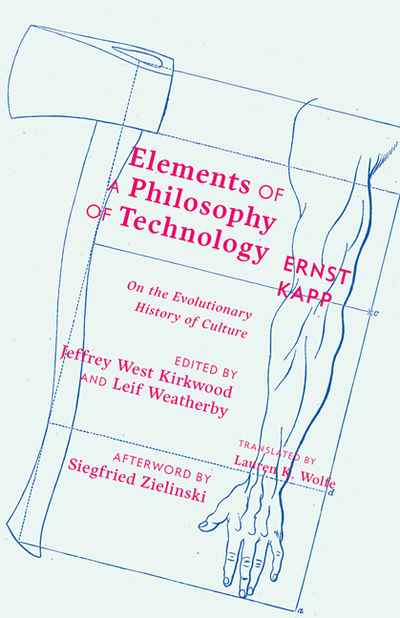 The first philosophy of technology, constructing humans as technological and technology as an underpinning of all culture.

Ernst Kapp was a foundational scholar in the fields of media theory and philosophy of technology. His 1877 Elements of a Philosophy of Technology is a visionary study of the human body and its relationship with the world that surrounds it. At the book’s core is the concept of “organ projection”: the notion that humans use technology in an effort to project their organs to the outside, to be understood as “the soul apparently stepping out of the body in the form of a sending-out of mental qualities” into the world of artifacts.

Kapp applies this theory of organ projection to various areas of the material world — the axe externalizes the arm, the lens the eye, the telegraphic system the neural network. From the first tools to acoustic instruments, from architecture to the steam engine and the mechanic routes of the railway, Kapp’s analysis shifts from “simple” tools to more complex network technologies to examine the projection of relations. What emerges from Kapp’s prophetic work is nothing less than the emergence of early elements of a cybernetic paradigm.